In the firearms or survival gear arena, I’ve always had a fascination with being able to adapt tools to perform more than one function, and do it well. In this series, we’ve discussed a cartridge adapter that allows the user to shoot a small pistol caliber bullet through a large centerfire rifle (.32ACP-.308WIN). We’ve also discussed the mechanical adapters made for some semi auto rifles and handguns. These allow the shooter to utilize the .22 Long Rifle cartridge for a practice/training or hunting application.
Next up in the series is another chamber adapter, but this one is for the shotgun. There are a number of “Shell Shrinkers” out there, that adapt one smaller gauged cartridge to a larger one. One manufacturer that comes to mind is Short Lane Gun Adapters. They make a number of shotgun, rifle and pistol adapters for a huge number of gauges and calibers. The adapter that we will discuss today is an old Savage “Four-Tenner” that I’ve had for a number of years.
SPECIFICATIONS

As you can see on the right side of the adapter pic, the “Four-Tenner” has a mechanical extractor which you line up with the extractor in you shotgun for easier shell removal.

The “Four-Tenners” that I own (I have two) are both 20 gauge to .410 adapters. They are approximately 12 1/4 inches long, so unlike many of the adapters you’ll see at “Short Lane Gun Adapters”, this one is not pocket sized. Obviously, the adapter has a outside diameter the same as the 20 Gauge chamber/barrel it is placed into. Also, the “Four-Tenner” has it’s own built in shell extractor, unlike many other adapters on the market.
ADAPTER’S PURPOSE
As with many adapters out there, these devices usually have two primary purposes. Those would be training/practice and hunting. From the training/practice side, I can tell you the “Four-Tenner” made a great understudy for my kids to learn the use of the shotgun at a very young age (they were 4 years old), and all without them having to initially deal with the recoil of a 20 gauge. I used those devices in my Savage M24, .223/20 gauge, and my Stevens 311 20 gauge to teach them how to lead a moving target properly.

My kids also started their hunting “Careers” by using both of those shotguns to hunt squirrel. For them to achieve a solid killing shot on a squirrel, they needed to be within 20 yards or so. This had the added benefit of making them learn how to stalk the alert “Tree Rat” and get into position for a good hit.
SHOOTING COMPARISONS 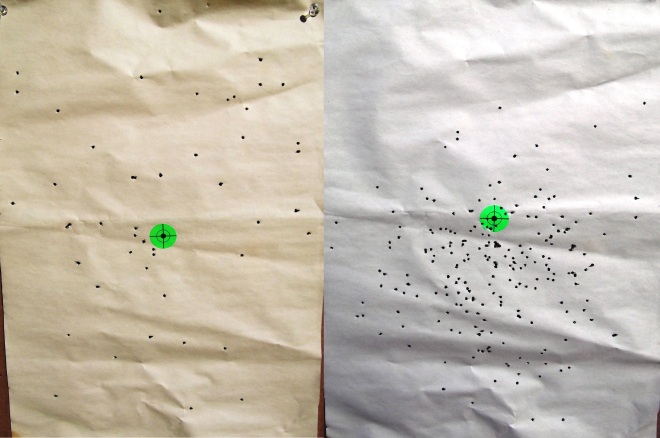 The test was simple. I placed paper targets at 20 yards because I figured this was a good average hunting distance. Using commonly available Remington ammo of the same shot size, I shot both targets with one round. For the .410, I used a 3″ high brass #6 shot load, and for the 20 gauge, I used a 2 3/4 high brass #6 shot load. As you can see by the photo, the .410 pattern shown on the left, has an obvious lack of “payload” for the number of pellets on target. That being said, it still will get the job done within a realistic range.
Another advantage to the “Shell Shrinker” concept is the obvious savings in weight and bulk, when comparing the .410 shell to it’s 20 gauge counterpart. The difference is carrying a cartridge that is approximately .45 of an inch in diameter and weighs about 22 grams, compared to that of a cartridge that is approximately .62 of an inch and weighs around an ounce. The difference with a box of 25 rounds is about 5 ounces in weight and a couple square inches in bulk.

Here is a comparison of the sizes of the two cartridges. The 20 gauge box pictured (#4 shot) was not the load used in the test.

CONCLUSIONS
All in all, I have gotten a lot of use out of the “Four-Tenner” adapter over the years. But the best use I made out of it was in teaching my kids how to properly use a shotgun, and starting them hunting with one. I know there are still “Four-Tenners” available on different sales sites, but honestly, you’re better off going to a site like Short Lane LLC to get what you are looking for. Hope this was helpful.
JCD
“Parata Vivere”- Live Prepared.